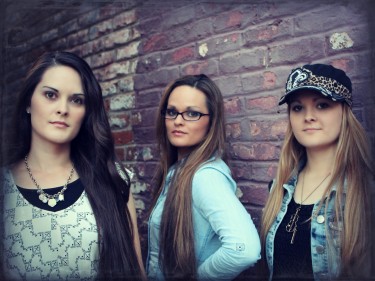 GOLD HEART, featuring the Gold sisters – Tori on mandolin, Jocey on guitar, and Shelby on fiddle – have earned great appreciation and respect from the bluegrass and acoustic community. Their award-winning instrumental ability and their accomplished, harmony-laden vocals are sweetly unique and rootsy.  The Gold sisters tour extensively and perform as a quintet with their father, Trent, on bass and Jared Lindsay on banjo.

These brilliant young artists are expert songwriters. Jocey and Shelby pen the majority of the band’s impressive material. Jocey was one of three finalists out of 983 contestants in the 2008 Chris Austin Songwriters Competition (bluegrass category) at MerleFest. The work of both Jocelyn & Shelby can be heard on “Never Let Go” and “My Sisters and Me”.

Highlights include a major international tour of the United Kingdom, performances in 23 US States and multiple appearances in Canada. Gold Heart was invited to perform as a 2009 IBMA Official Showcase Band in Nashville, Tennessee. Gold Heart has been featured twice on the PBS television program “Song of the Mountains,” which reaches thousands of viewers nationwide.  In 2008, Gold Heart was honored to win 1st place in the Podunk Bluegrass Festival Band Competition.

Currently, the Gold Sisters are hard at work crafting their fourth project with Ron Stewart as producer.  Gold Heart is a tight group that will astonish you from the first note to the last.  They have set high standards and this band won’t disappoint.