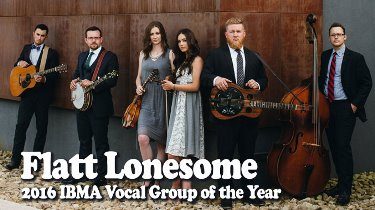 FLATT LONESOME has performed at many exciting places during their short time together as a band. Some of those highlights include performances at: Joe Val Bluegrass Festival (Boston, MA), California Bluegrass Association Festival (Grass Valley, CA), Summergrass (San Diego, CA), IBMA FanFest, The Grand Ole Opry’s 87th Birthday Bash, The World Famous Station Inn, Red, White, and Bluegrass(NC), and The Lakes Festival(Minnesota). Also, while performing with their friend and mentor, Barry Waldrep, the band has played Music City Roots where they received a thunderous standing ovation and garnered many new fans as well as opening for Marty Stuart and having Zac Brown join them on stage while performing in Georgia.

In August of 2012, FLATT LONESOME signed a recording contract with Pisgah Ridge Records (a division of Mountain Home Records) and with much excitement recorded their very first CD. The self-titled recording was released on January 29, 2013 and has been one of the highlight bluegrass recordings of the year, hitting the radio charts on more than one occasion. Flatt Lonesome has recently signed with Mountain Home Records for their latest release (July 2014), Too.  Flatt Lonesome won the 2016 IBMA awards for Vocal Group of the Year, Song of the Year, and Album of the Year!  In 2014, they won the IBMA Emerging Artist of the Year Award.

Although, FLATT LONESOME is a young band (both age of the band and its members), you won’t find six people with more desire, dedication, and determination. When you add that to three incredible lead singers, magical harmony, and impeccable musicianship – well, you’ve got FLATT LONESOME!