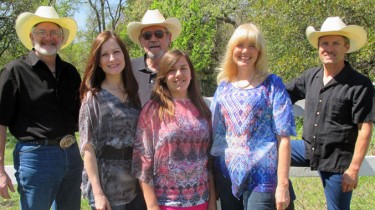 Wil and Darla
Wil and Darla met at the Jax. Beach Church of Christ in Jacksonville, Florida and married in 1985. Wil was in the Navy and I guess you could say, “Darla’s ship came in.” He bought her a guitar for their first Christmas, and he had just begun playing the banjo.  They’ve been playing music together ever since. Wil and Darla have 2 teenage children and live in Central Texas.

They were members of a Central Texas band called “The Wortham Stringbenders” about 20 years ago which played at many Bluegrass festivals throughout Texas, Louisiana and Kansas. They had the opportunity to play at venues with the Cox Family and The Lewis Family. They decided to start another little band called, “Dueling Hearts” after Wil began to mysteriously start writing songs. They say they blame it on McDonald’s Mocha’s. Darla got him addicted to them and he got so wired, that songs began to flood his mind.

“Dueling Hearts” is an acoustic, bluegrass gospel band that will pluck your heart strings with tight vocal harmonies and strong banjo and mandolin licks. Their songs combine all aspects of the heart such as the wonderful love of God, love for one another, and songs of heartache.”

Alvis and Dawn
Alvis and Dawn met in college through a mutual friend and became best friends – JUST friends! Twelve years later their relationship turned romantic and they got married. Both played in small rock bands during their high school days. In their early 20’s, they played in a Christian Country-Rock band that played all around Texas and produced one album. Since then they have played on various worship teams in various churches for 25 years.

Alvis and Dawn are avid cyclists and enjoy riding both on trails and on the road. They discovered bluegrass music when a cycling ride took them through the community of Pearl during the famous Pearl Bluegrass Festival. The music and pie were great, so the “Pearl Pie Ride” became a regular event. After awhile some of the Pearl folks discovered that these strange people in spandex played instruments, but they obviously couldn’t carry them on their bikes. One of the bass players started letting Alvis play his bass while he took a break and another guy loaned Dawn his guitar while he played harmonica. Eventually the Pearl Pie Rides went away, but Alvis and Dawn continued to attend as often as they could, this time with their own instruments. This is where they met Dueling Hearts and the rest, as they say, is history.

When they’re not riding bikes or jammin’, Dawn and Alvis are involved with Friends of Colorado Bend State Park, doing everything from building trails to organizing park events. In 2010 they asked Dueling Hearts to play for the Friends Fall Festival, a park fundraiser. Next time, they’re looking forward to playing in the park WITH Dueling Hearts!

Alvis and Dawn are thrilled to be a part of Dueling Hearts. The friendship and like-minded faith create a special chemistry, and the songs are just plain fun!

Arnie Adams
Arnie grew up in the hills of Virginia, just a few miles from Jim and Jessie McReynolds and also The Stanley Brothers, (near Kentucky and West Virginia). Being a hillbilly, I didn’t know any music other than Bluegrass. I was playing the Guitar at age 11, enough to accompany myself on some simple songs. As teenagers, my two sisters and I sang often on Radio Station WNRG, in Grundy, Virginia.  I’m a Texan by marriage to Patsy “my Partner” from the Austin area.. She’s been chief cook and bottle washer over the years and now takes lots of pictures and videos and does a wonderful job at all these things.

I’ve played music at lots of venues, some of them I’d rather not mention. However, I enjoy playing and singing “especially Gospel Music” at churches and wherever the opportunity might come up. One of the best times of my life was in the mid-eighties to mid-nineties when I traveled around the state and sometimes outside the state and played acoustic bass and guitar at “Bluegrass Festivals” with a group called the “Wortham Stringbenders”. (Two other members of that group was none other than the “Dueling Hearts” themselves, Wil and Darla Wilson.)

During that same period of time, I quite often played a dual role as musician and sound technician. I worked the mixing board for such greats as Chubby Wise and many Bluegrass favorites at that time.

Marlys Coursey
Bluegrass music has been a part of Marlys’ life since she was born. She attended her first festival when she was 6 months old. At the age of four, she told
her parents that she wanted to play the fiddle and be on stage. Two short years later, she did just that by performing at Salmon Lake Bluegrass Festival.  She fell in
love with fiddling on stage, and ever since that day she has performed every chance she gets.

Marlys has drawn the attention of other bands in the area with her young talent and is often asked to perform on stage at festivals.  She currently plays with 3 other bands;  The Coursey Family band, Paluxy River Bluegrass, and Tin Top Road.

She first saw Dueling Hearts perform at the 2013 Paluxy River Bluegrass Festival in Glen Rose, Texas. She was captivated with their energetic, fun-loving style of music and decided that day that she wanted to share the stage with them. She is thrilled to have the opportunity to play with such a talented group of people, and looks forward to many gigs together down the road.