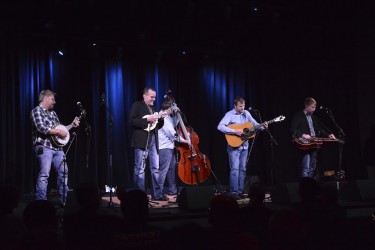 THE BOXCARS TAKE BLUEGRASS PEDIGREE INTO THE 21st CENTURY

Pedigree is paramount. In the musically prodigious world of bluegrass, where talent is as real and raw as the genre’s storied heritage, where you’ve been and who you’ve played with is your permanently etched calling card. Your past is your future, instrumentally speaking.

That explains The Boxcars’ instant acceptance in a sonic landscape teeming with fresh hopefuls eager for the seal of approval. Formed in early 2010, a mere five years ago, The Boxcars already boast three independently released full-length studio albums, years of touring in top bluegrass venues, a shelf-full of IBMA Awards, a Grammy nomination for its 2013 effort It’s Just a Road, and the kind of ready respect usually reserved for groups with much longer histories.

But pedigree is paramount. The five current members of The Boxcars – Adam Steffey on mandolin, Ron Stewart on banjo and fiddle, Keith Garrett on guitar and lead vocals, Harold Nixon on upright bass, and Gary Hultman on dobro – picked during stints with The Lonesome River Band, Dusty Miller, Alison Krauss & Union Station, JD Crowe and The New South, Blue Moon Rising, The Isaacs and Mountain Heart.

In other words, that’s a priceless amount of credibility.

“We had a pretty good feeling there would be a lot of curiosity about the band when we first started out,” says Steffey, 49, from his home in Jonesboro, Tennessee. “Everybody knew each other’s work. We all played with well known bluegrass groups. We knew we would have a lot of fans interested and supportive. We knew we would have an easier time than a new local group.”

Steffey will admit the band never put a list of goals on paper. He knew right from the get-go that the personalities and musical influences would all gel during the rigors of touring. True to his instincts, there’s been only one personnel change since the group’s inception. Fiddler John R. Bowman left in June 2014 after more than four years with The Boxcars to pursue his passion for music ministry. Hultman, who is clearly a bluegrass prodigy in his early 20’s, joined The Boxcars right as Bowman was exiting.

With Hultman in tow, The Boxcars will be one of the star performers at Lone Star Fest, the bluegrass-centric festival picking its way into the Doubletree Hotel in Richardson, Texas March 13 and 14, 2015. Also on the bill are Suzy Bogguss, Marty Raybon and Full Circle, Gold Heart, In Achordance, The Herrins, Tiger Alley and Dueling Hearts.

Tickets for Lone Star Fest, which is presented by Dallas’ Bluegrass Heritage Foundation, range from $38.50 to $63.50 for full weekend passes. To purchase tickets, visit lonestarfest.com.

At Lone Star Fest expect to hear Boxcars material from It’s Just a Road as well as 2012’s All In and 2010’s The Boxcars. The group might even surprise us with a song or two from its upcoming fourth studio album, the first for Hultman, which is scheduled for release in late April or early May. Steffey says they started recording the disc just before the Christmas holidays.

The Boxcars sound is a decidedly perfect merger of traditional and modern bluegrass. Instrumentally the quintet mines the rich hallmarks of the genre – all stringed instruments, no drums, spirited musicianship and immense precision. But vocally and lyrically, Steffey and company veer into present-day territory. There is no high lonesome sound here. The voices, the harmonies are a folkie and country mixture. The lyrics embrace love, life and relationships instead of the strife of farm existence, the toils of the coal mines, and the gothic realities of infatuations gone awry.

“We knew when we started the band that we didn’t have a high-pitched singer, a high lonesome voice, except when John Bowman was singing,” says Steffey. “We knew it would be a different kind of thing. We wondered how it would be accepted. The harmony structure had to be totally different.”

But Steffey had a precedent. He worked with Alison Krauss & Union Station for eight years, so he watched firsthand how Krauss changed the bluegrass DNA. She brought the style into the 21st century, opened it up for greater mass consumption without ever losing sight of its musical strengths.

“The impact that Alison has had on bluegrass music in the last 20 years has been unmatched. That helps the whole world of bluegrass.”

Yet the purists need not worry about The Boxcars.

“We try to include some old traditional things, some even that are obscure because we respect that stuff so much,” says Steffey. “But we go into as much original tunes as we can and we go into the modern style. But as far as the instruments go, we will always be in that traditional world. We are a bluegrass band. We wave that flag.”

Steffey was barely 15 years old when he first picked up the mandolin and started playing. He immersed himself in the bluegrass circuit, frequently checking out local and national bands in concert. The allure was strong and solitary. Nobody in Steffey’s family was into bluegrass. So it was his original passion, and by the time he was in high school Steffey was already playing professionally.

“What you are seeing when you see it live and when you hear it, it is all happening right there. There are no tracks, no vocal manipulation. I enjoyed the melodies as much as anything. One of the things that really got a hold of me is the lyrics of the songs. I could relate to those lyrics even though I didn’t grow up on a farm or work in the coal mines. It’s about working very hard for something. It was inspiring stories. It was real.”

And it’s permanent. If there were any hurdles to clear when The Boxcars first emerged out of the rehearsal space, it was the issue of convincing audiences that this bluegrass super group wasn’t a quick pick-and-bow side project. These guys, all of them spotlight veterans with years of headlining experience, weren’t launching some vanity entity.

“The first couple of years we had to break down the walls,” says Steffey. “It took a while to get folks to understand that this is our main thing. This is what we do. Now I think folks have finally understood that we are here to stay.”