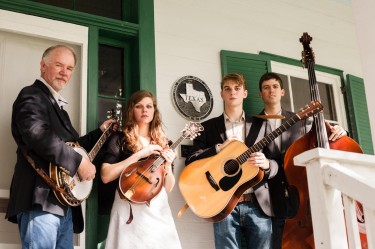 Influenced by diverse musical backgrounds, In Achordance delivers a fresh, new sound while honoring the bluegrass tradition.  It’s where Scruggs-style guitar and banjo meet the 21st century, and where the high lonesome bluegrass sound meets the Gospel hymnal.  This group, with energy and spirit, has melded their love of Jesus Christ with Bluegrass and Gospel music in a way that stirs emotions and sets feet tappin’ and hands clappin’.

Back home, near Corpus Christi, Texas, Bill, Ryan, Holly, and Roy met in their local church where they discovered a common bond in music, occasionally playing and singing for the congregation. In early 2014 they came together as In Achordance, with the purpose of glorifying God through Bluegrass music.   Within months of forming the band they were honored and humbled by winning the Bluegrass Heritage Foundation Front Porch Showdown (Battle of the Bands Contest) in Dallas, Texas. Since then they have traveled to various venues, performing throughout Texas. Everywhere they perform they receive requests for a CD, prompting them to begin studio recording. In Achordance anticipates their first album out in the fall of 2014.